What does Saturn square Uranus mean?

Saturn square Uranus is a 90° angle between the planets Saturn and Uranus, viewed from Earth. It is a temporary planetary contact that repeats three times in 2021. It reflects the societal and personal change, instability, and even violence that we’re seeing at the beginning of 2021. Astrology also gives us a timeframe: the scenarios forming now will intensify through the Summer months and play out at the end of the year.

The planet Mars activated the Saturn-Uranus square in January 2021, around the time of the Capitol insurrection and the inauguration of President Biden. Mars will move through this volatile space again in early July, and again in November.

What can we expect in 2021 when Saturn squares Uranus?

Does this Saturn/Uranus profile sound like anyone you know?

“…Experiences oneself as unfairly gagged or limits oneself in order to outrageously kick over the traditions in other places. Then lives one’s freedom in such a compulsive manner that it becomes an unfreedom as a result.” –Banzhaf & Haebler, Key Words for Astrology

The authors are referring to an individual birth chart, whereas I am discussing the astrological “weather” for 2021– but can you see how this describes some of the personalities in the news lately? (No-maskers, domestic terror groups, a certain former president I won’t name.)

How will Saturn square Uranus impact your personal life?

The Saturn-Uranus square shows tension between the changes that need to happen and the obstacles, roadblocks, and resistance to that change. It can bring hidden truths to life, let the light in, and clear the cobwebs from your window so you can see what’s really going on.

Saturn says “You must” do whatever the squared planet represents– in this case, you must wake up, face the truth, address the breakdown, break away from a bad situation, or fix what isn’t working.

I have followed an account for several years that posts screenshots from young women of messages they get from guys on dating apps. There’s a pattern so predictable that it is boring, even in its shockingness. Here’s how it goes.

Maybe there’s a little banter before the turn-down. Sometimes it’s spiced up with other unpleasant surprises, like the famous unsolicited junk shot. But those three steps form the basic recipe.

There’s a similar recipe that applies to close relationships. Let’s say you have decided to draw the line with a verbal, emotional, or physical abuser. Or anyone who feels entitled to treat you a certain way. You make it clear you won’t put up with their shit anymore. This is where you need to be ready to meet the mythical Furies. 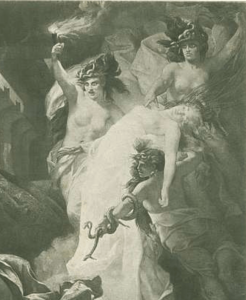 In his book The Gods of Change, Howard Sasportas likens the transits of Uranus to the myth of the Furies. These beings would appear whenever Uranus visited his wife Gaia (Saturn’s mother). They were so terrifying and unpleasant that ancient people referred to them as the “gracious ones” to avoid pissing them off.

In modern psychological terms, the Furies represent “change back” maneuvers.  People turn to these countermoves when someone they are close to stops playing their game. The abuser liked you better when you were younger and less certain of your boundaries. If you don’t play along anymore, they have to adapt to your new truth to continue the relationship. If they feel threatened by it, they make you a bad guy. They react out of apparent hatefulness, revenge, rejection. You’re rejecting me? I never loved your broken ass anyway.

“Put simply, the challenge of change requires us to anticipate resistance from within and without-and to manage our own anxiety so that we can be our best self when the other person, out of their anxiety, acts like a big jerk.” [source: Dr. Harriet Lerner]

If Saturn and Uranus make close contact with planets in your birth chart, a change or separation involving a “change back” reaction may be part of your process.

What are the health implications of Saturn square Uranus?

Pay close attention to these possibilities if Saturn and Uranus make close contact with the Sun, Moon, Mars, or Saturn in your birth chart.